Having, on behalf of residents, raised the poor condition of pavements along Balgay Road and in the short west part of Scott Street west of Balgay Road (towards the Balgay Park entrance) in the past, I am pleased to see the long-awaited resurfacing now being completed.
Here’s a plan of the works kindly supplied to me by Tayside Contracts and a couple of photos of the works :

On behalf of residents, I recently raised with the City Council’s Roads Maintenance Partnership road flooding concerns regarding Balgay Road.
I have now received the following feedback :
“Balgay Road has been checked and all the gullies are clean and clear although have been noted to be slow-running in times of very heavy rain.
Previously, any particular issues with ponding water have been dealt with by the gully machine.
There was no mud noted on the carriageway however it is possible this was run-off from Balgay Hill/ Park which has now been cleared or washed away.”
I have also raised similar issues at nearby Sycamore Place, following residents raising these with me.

This morning, I had useful site visits with roads inspection staff from the City Council looking at poor pavement condition in part of Perth Road and also the poor conditioned road surface at the busy Balgay Road/Blackness Avenue/Blackness Road junction (see right).
With regard to this roads junction, I am pleased to say that the junction will be reinstated with work starting next Monday (12th May) – weather permitting.   The work will take a maximum of 2 days but might be completed in one day.   As temporary traffic lights will be required during the improvements work, these will be put in place only after the rush hour on Monday morning.
Later this morning, I had a very useful meeting with our new senior police officer for the West End (and the remainder of what the police term ‘Dundee South’) Inspector Gary Ogilvie, at which we discussed West End policing issues.
Earlier tonight,  I attended the Annual General Meeting of Community Spirit – the community group for the “north” part of West End Ward, covering Tullideph, Pentland, Ancrum and the Cleghorn area.   The meeting took place in the Mitchell Street Centre.
Guest speaker was Ian Ford of the Friends of Riverside Nature Park, who gave a very interesting presentation on the development of the park.    Thereafter, I had the pleasure of chairing the actual AGM part of the meeting.    Sandra Myles stood down as Chair after four very successful years in the role and we all thanked Sandra for all she has done for the group and the local area – I’m pleased to say Sandra will still be attending Community Spirit’s meetings.

New Chair is George Chalmers and Len Jamieson is continuing as Secretary.
One final update for today.   Residents complained to me that the dog bin in Logie Avenue at Ashbank Road was “rather full” – as you can see (left) that’s rather an understatement!   The Environment Department has assured me this will be urgently tidied.
Residents have complained to me about the poor road surface at the busy Blackness Road/Avenue and Balgay Road junction – see below:

I have arranged to meet the local roads inspector on-site to discuss possible improvements here.

Residents have reported to me that the litter bin at the corner of Sycamore Place and Balgay Road has been ripped off its post    See right.
I have reported this to the City Council and asked for a repair.

Yesterday, I took part in a site visit with the Head of Transportation and a Senior City Council Engineer at the junction of Balgay Road/Blackness Road/Blackness Avenue – see right.   Last year, I welcomed proposed road safety improvements at this junction as constituents have mentioned what a difficult junction this is – very busy and many vehicles making right turns.

Lining to the west on Blackness Road has been altered to improve vehicle movements coming towards the junction and council officers assured me that its effectiveness will be monitored in the coming months.

I also had the pleasure of a walk round the improvements underway at Blackness Primary School that include new window blinds, new lighting, staffroom refurbishment, new junkers timer sports floor in the gym – see right, wood treatment, windows improvements and improvements to the entrance and main stairwell.    I had previously queried the cost of new cleaners’ cupboards and this was reviewed and reduced in cost I was pleased to note.
Also yesterday, I attended a presentation by the Managing Director of Tayside Contracts that was well-attended by councillors and senior council officers.   The presentation was extremely interesting and emphasised the importance of shared service provision at a time of real financial challenge for the public sector.

Further to my recent article about flooding across Balgay Road, I have received the following feedback from Dundee City Council :
“The Road Maintenance Partnership inspector has checked the gully at this area of flooding on Balgay Road and has cleared debris from the gully grating which allowed the remaining standing water to drain away.   The gully appeared to be running effectively.   However he will continue to monitor it during his regular inspections.”

I have received concerns from residents about flooding on the roadway of Balgay Road north of the junction with Sycamore Place  – see photo (right).
I have raised this matter on their behalf with the City Council’s Road Maintenance Partnership.
Tonight saw the last City Council committee meetings prior to the summer recess and there was a substantial amount of business on agendas.
At City Development Committee, I welcomed the proposal that the Blackness Road/Blackness Avenue/Balgay Road junction (see right) will be subject to road safety improvements over the next year.   Many constituents have mentioned what a difficult junction this is – very busy and many vehicles making right turns – so the proposal to improve the junction is good news.    At the same committee, I asked questions about a possible Business Improvement District for the City Centre and I also asked about roads condition in Dundee.
At Policy and Resources Committee, the Liberal Democrats supported a Labour amendment that tried to stop the City Council moving its postal arrangements away from Royal Mail.   This was defeated by the SNP administration, who have moved council postal services to a private sector operator.   It is ironic that the SNP regularly express concern over the future of Royal Mail, then undertakes its own little version of mail privatisation.
At the same committee, I also asked for assurances over a corporate review of council charges to ensure that low paid workers receiving Working Tax Credit receive concessionary rates as well as others on low income.

For some superb photographs of Dundee in the 1950s at http://www.normanmoore.com/dundee/.    Here’s Balgay Road – below : 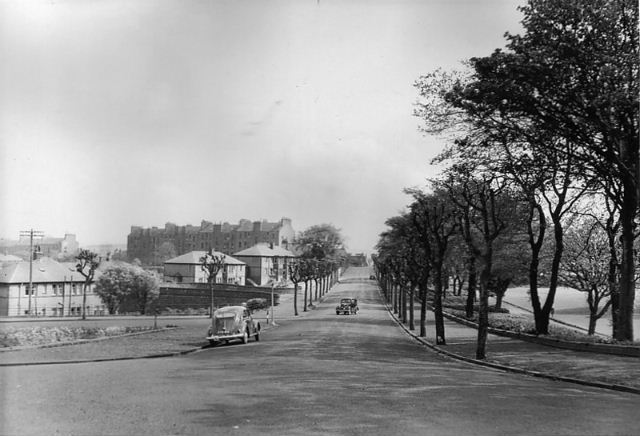 I complained bitterly last year about the extent of weeds on road edges and pavements in the West End, and all credit to the City Development Department – weed spraying in the West End was started earlier this year and I have had far fewer complaints from residents this year.
In response to an e-mail I sent the City Engineer recently, I received this from him today:
“I can confirm that a request for a second spraying of the weeds at the junction of Blackness Road and Norwood Crescent has been forwarded to Dundee Contract Services. I have also forwarded on your comments regarding the areas at the tree bases.”
The tree bases are, of course, in Blackness Road, west of Balgay Road/Blackness Avenue.

The theory of course was that I’d do a post on the blog yesterday but only two and a bit days away in London and there was a massive amount to catch up on yesterday (and today!)
London consisted of meetings and one nice Dinner really but I did take a short walk from the hotel in Bloomsbury and, as you can see (right) it was awfully near the Post Office Tower!
OK, then, back in Dundee, and spent much of the last two days catching up on phone calls to constituents and responding to e-mails. I have had quite a number of people contacting me about the Dock Street tunnel works and also concerns about the Botanic Gardens (I have now had a response from the University Secretary on the issue and will continue to emphasise how vital the Botanic Gardens are for the West End and the City as a whole).
Additionally, pleased to see the launch (tomorrow, Friday) of a new family support network (“Babes and Co”) for the West End. You can read more about this by clicking the headline above.
This afternoon, along with the City Council Leader, Education Convener and Director of Education, I was at Blackness Primary School to see the “Writer’s Craft” project in action with Primary 7 pupils. Aimed at improving pupils’ literacy skills, it was brilliant to see the enthusiasm and ability of the pupils – a great credit to Blackness PS.
Lastly, met a resident today about the state of the pavements in Balgay Road – have raised this with the City Council.