Dundee’s biggest Jobs Fair will take place at the Caird Hall tomorrow – Thursday 27th September.
This event and exhibition is open to anyone who is interested in moving forward in 2018/9, whether that’s finding a job, changing career, starting a business or adding to the skills and qualifications they already have to find something new.
Further information is available here.
Dundee and Angus Chamber of Commerce, Skills Development Scotland and partners are organising this year’s Dundee Jobsfair :

Earlier today, I had the pleasure of attending the Great War Dundee and BBC World War One at Home partnership event, taking place at the City Square, Marryat and Caird Halls and what an excellent, informative and interesting event it is.
There is still the opportunity to visit tomorrow, Saturday 2nd August, from 10am to 5pm.
The Great War Dundee Commemorative Project 2014-2018 deserves congratulations for its exceptional efforts to ensure the Great War is properly commemorated in the city,that local people get involved and that knowledge of Dundee’s part in the Great War is increased.
Here’s a couple of photographs from the event today:

Local Minister David Robertson highlighted in the Courier letters earlier this week his valid complaint about the sale of tickets for the forthcoming Mumford and Sons Caird Hall Concert.
I have since been in contact with the Caird Hall Manager about the situation and I reproduce her response below:
“I did request a ticket allocation from the Promoter of this Concert for Dundee City Box Office to ensure some citizens could purchase locally. The Promoter did intend initially to sell the tickets only via the Bands website via a password as everyone in the business is constantly trying to stop the ticket touts.
Unfortunately there is no government backing to make touting illegal although I understand there was a restriction with regards to re-selling of Olympic tickets.
Mumford and Sons are one of the most popular Bands around at the minute, they are also playing SECC on this tour and again sold this out on Friday morning.
We do have a top range ticketing system in Dundee City Box Office and with that is the facility to sell out online in minutes but again a decision was made to hold some tickets for the queue. It was always the case that demand would be in excess of availability as is the case for all major Shows worldwide.
Having assessed the situation following the sale and the comments made to Box Office staff etc, it maybe that in future the best procedure would be to have such Bands sell all of their own tickets to their fan base.”
Personally, I think there is a real need for promoters to create the conditions where local fans of major bands get a decent chance to obtain tickets for concerts like this and it is really irritating to learn, as David pointed out, that ‘ticket ”agencies”, eBay and other on-line sites were selling them openly within minutes for up to seven times the price.’
There is also a real need to government action to stop ticket touts – if it can be actioned for the Olympics, why not for other popular events?

Stewart Findlay, who is acting as the local co-ordinator for the upcoming Scottish Boys’ Brigade Bands Contest, that is taking place at the Caird Hall on Saturday 12th March, has been in touch with me about promoting this excellent event on www.dundeewestend.com.

The event is open to the public with doors opening at 10.30am and finishing around 3,30pm.   Guests may come and go as they please throughout the day.   Entry to the event is only £3 and £2 (concessions) and tickets can be purchased on the day of the event at the main entrance to the Caird Hall.

Bands from all over Scotland will be competing to be crowned the ‘Best BB Band in Scotland’ in their chosen grades and there will be pipe bands, brass bands and flute bands in attendance.

It will be a great day and I have no doubt it will be extremely well-supported. 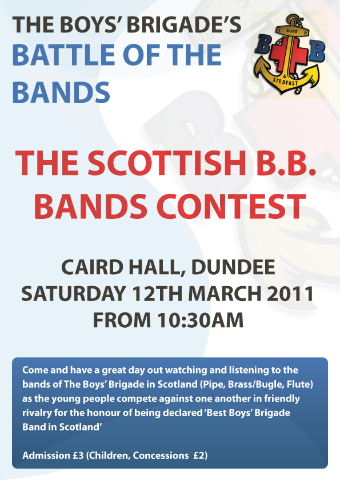 Yesterday’s Courier followed up on Monday’s story about my concerns (and those of many local residents) about some HGVs ignoring the 3 tonne weight limit on the bridge at Riverside Drive south of the Botanic Gardens. I also spoke on Radio Tay and Wave 102 news about the concerns and action taken by the City Council and Tayside Police. The issue was also covered in the Press & Journal today.
Yesterday was a really busy day with Mike Galloway (City Council Director of Planning & Transportation) and myself (in my role as Planning & Transport Convener) selecting the winner of this year’s Dundee Civic Award – the award is awarded annually by the City Council to the best project and presentation from third year students of town and regional planning at Duncan of Jordanstone, University of Dundee. The three shortlisted entries were extremely strong (making choosing the winner a difficult task) but congratulations go to Garrie Watson, this year’s winner. You can read more about this from last night’s Evening Telegraph by clicking on the headline above.
Later in the day, I attended meetings of the Balgay Stakeholders’ Group, then a committee

meeting of Logie Residents’ Association (who have had a very good response to their recent residents’ survey on local issues) and lastly a committee meeting of Friends of Magdalen Green. The Friends of Magdalen Green, whose first AGM was only last May, has gone from strength to strength, with an ever increasing membership. One thing you can say about the West End of Dundee is that it has a variety of excellent local groups, undertaking very good work for our community.
A number of residents have pointed out that the proposed one day closure of Glamis Drive on Monday (I highlighted in the blog the previous Friday) did not appear to take place. The City Council’s Planning & Transportation Department has since advised me that:
“The closure did not take place. The contractor had a problem with his civils squad. The work will be rearranged for a later date.”
I will, of course, let residents know of the amended date when I am advised of this.
Most of today spent in Falkirk with my employer’s Scottish Association AGM, which was very well attended and informative.
Lastly, further to my blog entry last Sunday about Edison Lighthouse … I was speaking with a local reporter on the Riverside Drive bridge problem on Monday and he did point out that Edison Lighthouse does appear in the video to be on the steps of the Caird Hall! Very close inspection tells otherwise but there must be another building out there with steps like the Caird Hall’s.