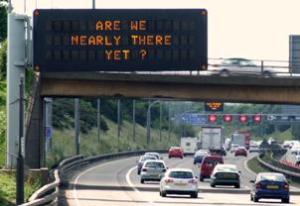 Last year, the Automobile Association criticised the over-use of variable message signs across Scotland – the signs – the type of sign like the one pictured (right).    The AA President Edmund King said that many of the messages on these signs are “patronising and simplistic” and the over-use of these signs with such non-messages meant that drivers tended to ignore them – so ensuring that when important messages – for example, regarding road closures or tailbacks – were displayed, many drivers simply did not notice them.

Since the AA’s criticism was raised back in October, there has been further criticism during the recent severe weather – including that from Tory MSP Liz Smith, who said, “For example …when freezing fog was a serious issue on the Forth Road Bridge, the gantry sign on the southbound carriageway, just a mile away from the fog, was reading ‘winter weather, plan ahead’ and, unbelievably, in the middle of one of the worst white-outs of the winter, one sign was telling motorists to consider cycling as an alternative to car travel!”

The criticism made by the AA and by Liz Smith is valid – I regularly pass these signs with inane messages displayed about ‘think bus or train’, ‘take care whilst towing’, ‘drive with consideration’ and ‘frustration causes accidents’ – these messages are frankly so useless and patronising that the driver simply switches off from reading the signs.

During the recent bad weather, the signs at times displayed very useful information about road closures, delays and other travel information that was actually worth displaying – but even during this period, signs were often displaying the usual rubbish – with the added classic “winter weather plan ahead.”    Would you believe that you can actually check online what’s displayed on every one of the 128 variable message signs across Scotland by going to the Traffic Scotland website (does Scottish Government really have to devote resources to maintain this “facility” online?) – so you can see tonight that on the A9 at Aviemore, the useless message “happy new year fasten your seatbelt” is displayed!

One of the pointless messages on these variable message signs is about cutting your carbon emissions.   My suggestion is that Scottish Government can help that effort by removing all the generalist, simplistic and patronising messages – and just switch the signs off until there is genuinely real, useful, travel information about delays, roadworks or difficulties to display.

Back on 2nd November, I reported (click on headline to view) the success of Blackness Area Residents’ Association in obtaining nearly £6000 lottery funding to provide an entertainment system for the Corso Street sheltered lounge. The presentation by Lord Provost John Letford took place this afternoon in the City Chambers (see right and I’m third from left!) – it was a jolly event and the LP was on top form!
Later in the afternoon the City Centre Beacon Management meeting with Tayside Police took place. Issues covered included graffiti, traffic concerns in Commercial Street (a very useful update from Planning & Transportation on the current works to improve matters at the junction with Murraygate/High Street) & I raised an issue about traffic concerns in North Lindsay Street, which the Police promised to progress.