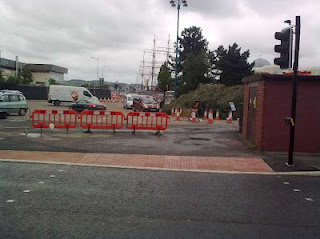 At the recent West End Community Council meeting, a member advised that he had witnessed the driver of a vehicle – to avoid driving up to Greenmarket & then down past the Scottish Enterprise building to the station, where a diversion is in place during the Waterfront road works – simply drove across the pavement into the station car park area directly from South Marketgait, narrowly avoiding pedestrians.
As reported in today’s Courier, I raised the matter with the City Council’s Director of City Development calling for action to prevent such a stupid and dangerous manoeuvre from being possible.
In response, the Director of City Development at Dundee City Council has advised:
“From an inspection on site, we believe the motorist must have crossed the footpath at the pedestrian crossing, so as an interim measure we have installed a temporary barrier to prevent vehicular access. The contractor has been instructed to monitor this location and report to the police any driver attempting to access the Station Car park illegally.
Please note that this pedestrian corridor from the pedestrian crossing to the station will be re-configured this summer and the station car park will be closed as part of the Station Bridge replacement contract and this should eliminate this illegal manoeuvre.”
Speaking with constituents, it appears this dangerous manoeuvre was not an isolated incident and had happened on a number of occasions in recent days, so I am pleased that the City Council has taken swift action.   See photo of temporary barrier – above right.   I think it is important that all drivers observe the proper diverted route and don’t try to take shortcuts that are frankly dangerous to both pedestrians and indeed themselves.
The City Council’s Head of Transportation also advised me:
“I have also made Tayside Police Road Policing Unit aware of this manoeuvre, but the engineering measures should prevent any further incidents.”